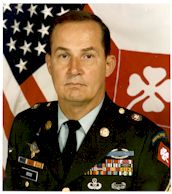 I got a call at work with bad news.  Another Brother was down and being taken to Vanderbilt Hospital via “Life Flight”.  It was CSM (RET) Joseph M. Bossi.  Images of days gone by started creeping though my small brain.  Times of when Joe, alais “Don Merino” and I would sit at SafeHouse 38 smoke and joke with Da Cajun, Da Smurf, Diamond Jim, Mild Mannered Mikey, and Da Italian Stallion.

Don Merino was a major influence and contribitor within Chapter 38, SFA and SafeHouse 38; especially during the early years.

CSM (Retired) Joseph M. Bossi was a classiful Sergeant Major and has been reassigned to the big patrol base in the sky, but I suspect he, along with other Brothers, will be lighting the DZ for the rest of us.

Joe, keep a cool one for me and remember I smoke Marlboro 100’s known as Reds.  So if you find any C-Rations laying around save the Marlboros for me, even though they only have “shortie” Marlboros in them.  If you find Lucky Strikes please save them for Poker John.

Another Brother who will sorely be missed, but never forgotten.

Command Sergeant Major (Retired) Joseph M. Bossi age 77 of Clarksville, Tennessee passed away on Saturday February 6, 2016 at Grace Healthcare of Clarksville.  He was born February 3, 1939 in McKeesport, Pennsylvania.  Joe was a patriot who served his country in the United States Army.

Command Sergeant Major Joseph M. Bossi entered the U.S. Army in 1956.  While in the Army he served four tours in Germany, three combat tours in Vietnam and one tour each in Thailand and Italy.

Joe is survived by his wife Karin E. Klein Bossi of Clarksville; a daughter Kathi M. Stokes and husband Ricky L. of Clarksville; two sons Joseph R. Bossi and wife Jackie B. of Falls Church, Virginia; and Richard M. Bossi of Nashville, Tennessee.  He is also survived by three grandchildren, Charlotte M. Bossi, Charles K. Stokes, and Amber Stokes as well as eight great grandchildren.  In addition to his parents, he is preceded in death by a grandson Darrell R. Willis.  A memorial service with military honors will be conducted on Friday February 12, 2016 at  1300 hours (1:00 p.m.) at the Kentucky Veterans Cemetery, West at Hopkinsville, Kentucky.