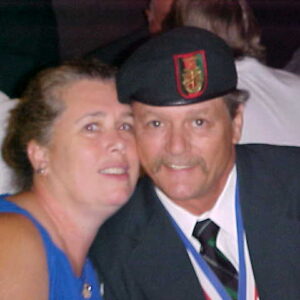 Frank Wisniewski called and told me that Sir Joseph was in trouble, he thought his was on his last breath.  Both of us rushed to Joe’s house but there was nothing we could do to save our Brother.  It was truly a sad day for us and the many friends that Joe has.  He is another Professional who will not be forgotten.

Master Sergeant (Retired) Joseph Edmund Cyr, 54, served a long fulfilling and professional career in 5th Special Forces Group (Airborne). Most of his friends knew him as “Sir Joseph of Cyr”. He was a “True Quiet Professional” and a member of “The Brotherhood”.

Sir Joseph of Cyr died Thursday, November 13, 2003, at his residence from a long hard fight with cancer.  In attendance was his loving wife, Faith Cyr; Frank Wisniewski, President of Chapter 38; and Steve Stone, Secretary of Chapter 38, SFA.

He was born April 9, 1949, in Waltham, Massachusetts, son of Arthur R. and Marian E. Triner Cyr. He was preceded in death by a son, Jonathon Matthew Cyr.

During his military service, Joe served on many missions in various foreign countries, including Operation Desert Shield/Storm, the Middle East, Europe, and Africa.

Many members of The Brotherhood and family traveled from far and wide to attend the services. After the burial, the traditional Brotherhood toast was conducted at the burial site followed by a flag raising ceremony at the Cyr Ranch.