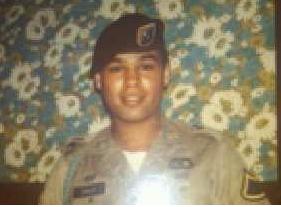 Frank Wisniewski emailed me and indicated that Diamond Jim had a stroke. In disbelief, I immediately called MSG (RET) Quentin Balot Jr., known as “Q”, Jimmy’s brother.  It was true Jimmy was in trouble, on a ventilator, and his brain was swelling.  The next day I spoke with “Q” again and he said that Jimmy was gone at the age of 54, just like Sir Joseph of Cyr.  Diamond Jim, Sir Joseph of Cyr, and I used to work, drink, laugh, and cry together.

I remember when Jimmy, along with Wendell Greene, Joe Bossi, Mike Cioch, and Marvin Crist volunteered to assist training the 101st and other units before they deployed to Iraq and Afghanistan.· His ingenuity knew no bounds as we setup training folks in “cultural and situational” awareness.· Jimmy made certain we had a constant commo link and plenty of simulated IEDs for training.· In fact, when the training simulators started failing because of tempature changes, Jimmy figured out the problem and designed a new way to make them work.  Once when a Lieutenant was clearing a house, a simulator misfired.  Without hesitation Jimmy proceeded to fix the problem. But as there wasn’t enough time before the Lieutenant returned through the doorway, Jimmy discharged the simulator while yelling “Allah Akbar” to maintain the true training affect.

Sometimes Jimmy would create a controversy and some folks mistook that for sniveling, but those who truly knew him understand that he created controversy because he wanted people around him to think.

It was truly a very sad day for us and the many friends that Jimmy has. I and others will truly miss him. He is another Brother, a Professional who will not be forgotten.

He attended Blessed Sacrament School, in both Newark and Elizabeth NJ and Saint Mary of the Assumption and Thomas Jefferson High Schools in Elizabeth, New Jersey. He was a member of the track team at Thomas Jefferson. He was a graduate of Devry Technical Institute.

He served a long 26 year fulfilling and professional career with several units to include: 2nd Infantry Division, 1-75th Rangers, 11th Special Forces Group (Airborne), 278th Air Defense Artillery, 1-141st Infantry, and 301st Troop Command Tennesee National Guard.  He served in the Army, Army Reserve, and National Guard. Most of his closest friends knew him as “Diamond Jim Balot”. He was a “True Professional” and a member of “The Brotherhood”.

During his military service, Jimmy served on many missions in various foreign countries, most recently in Operation Enduring Freedom, Afghanistan.  He held several MOS’s to include:  05B, 11B, 18B, 18E, 25C, 25S, and 31C.

In lieu of flowers donations were made in his name to St. Jude Children’s Research Hospital 501 St Jude Place, Memphis, Tennesse 38105.