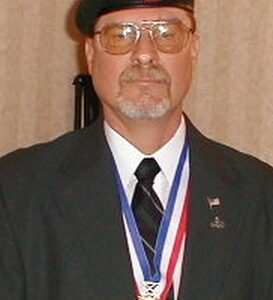 I received a message from Mikey a long time ago; many years have passed and I cannot remember the exact date.  He was out of SF and felt the urge to communicate with his SF Brothers once again.  I had been the Secretary of Chapter 38 for a long time, thus linked him up with The Brotherhood because I felt his need for SF comraderie.

When I received terrorfying news from Lil’ Sis (Linda Cioch) that Mikey was in the hospital and the prognosis was not good.  I asked if there was anything I could do.  Lil’ Sis indicated that Mikey needed a laptop computer to check his emails at the hospital.  I asked if a tablet would do as I believed it would be easier for him to use.  She indicated that it would probably work better, so, I ordered one and sent it to Mike and Linda.

As I sat in my “man cave” I began to reminice about the things that Mikey and I had done together.  The many times we ran training operations to help soldiers.  He was our demo man on ODA-Cassidy (Team Fallujah) He watch my “6” more than once; I never had to worry about doing stupid things when he was around because he would let me know in a heart-beat if he thought it was dumb.  Mikey also had a sense of humor and a “hard headness” that I would put up against any person I have ever met.  The “war stories” we shared got better with age.

Linda (Lil Sis) and Mike (Mild Mannered Mikey) have always been staunch supporters of Chapter 38, SFA; the SafeHouse, and the GBVA.  I will definitely miss Mikey and the memories we share, but I will absolutely never forget him.  Take Care Mikey, and save a cold one for me.  Also, tell The Brothers I said, “Hi!”

It was truly a very sad day for us and the many friends that Mikey and  Lil’ Sis have. I and others will truly miss him. He is another Brother, a Professional who will not be forgotten.